Just added to your cart

USE CODE #FREESHIPPING ON ALL US ORDERS OVER $100

The founder of Splashed by DKG and Magic City Fashion Week shares what got him to where he is today. 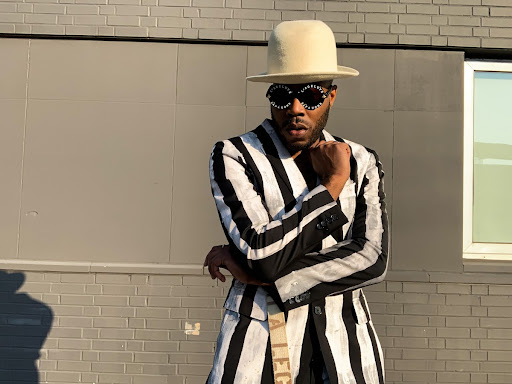 Creativity has been a crucial part of Daniel Grier’s life since his days as an only child with two working parents. “I was never bored,” the designer remembers while reflecting on Lego-built cities with Hot Wheels cruising the streets. He’d often make up scenarios to act out like being a magazine editor or school principal. As he grew older, Daniel turned dreaming of idealistic careers into a reality – he’s the founder of a successful clothing brand Splashed by DKG and one of Birmingham’s largest fashion events,  Magic City Fashion Week.

Just like creativity, fashion was deeply ingrained in Daniel’s life from an early age. His grandmother instilled many of these values, even if a young Grier didn’t always appreciate the lessons. “She to me is a style icon. Our grandma would have me at every thrift store in the city of Birmingham. Every yard sale, estate sale. If she knew about it she was going, and she was only looking for vintage items that she could flip. I hated that at the time. I thought ‘Oh my God, she hates us. She has no regard for kids wanting to play’.” Daniel claims he’s the perfect hodgepodge of his grandmother and his dad’s lessons on ironing shirts, pressing pants, keeping your shoes clean, and always taking care of your smile and your haircut. The values instilled by these two family members still clearly shines in him today.

Daniel knew he wanted to dress differently than everyone else at an early age, and he still cringes at the thought of seeing something he’s wearing in a store’s display window. His earliest solutions to this problem involved going to stores like Michael’s to find cool things to add to jeans and shirt pockets to make them stand out. When he was finishing his junior year of college, he started thinking more seriously about a life working behind a desk and decided to turn his fashion interest into a serious endeavor. He took the first step towards entrepreneurship by tie-dyeing jeans after deciding he was bored with how they looked. He put his work on Facebook, and the calls he got made him realize that he could turn this into something.

These loose formations in 2013 turned into a serious business two years later – and a lot has changed in the years since. The growth has surprised Daniel himself at times, as he’s now in rooms with NBA stars, TV show executives, musician stylists, and more. But it’s also introduced him to some of the more challenging aspects of the industry that makes him miss the days where he was creating just for the fun of it - where if someone happened to buy something he’d be overjoyed. Now it’s accounting, keeping up with trends, looking for growth and funding opportunities, and facing the competitive challenges that come with moving his homebase to a large fashion market in Atlanta.

While these growing pains have certainly been a challenge, Daniel has embraced the path forward while helping younger business owners become aware of these realities. He’s also found a new focus on using his platform to create a message. Yes, it’s great to have cool clothes, but “what’s behind that? That’s when it started to become a business for me. Now I can put out clothes that mean something, that stand for something, that have a message, that people can wear and feel better about themselves. Gain more confidence.”

The latest version of this was the June release of the Reflections Collection 2021. Daniel had been sitting with himself and reflecting during the pandemic–something many of us can relate to–and was able to turn this into a visual message. He wants people to understand that just like with jeans, there are thousands of ways humans can better their situations even when they think they’re worn down. As long as you still have your breath and your hope, there is an opportunity to turn things around. And people shouldn’t underestimate clothing’s ability to uplift the human experience. “Fashion is your livelihood. It’s how you feel about yourself.”

In addition to his work with Splashed by DKG, Daniel operates one of Birmingham's most spectacular events in Magic City Fashion Week. The event is currently looking ahead to it’s fourth season, which is planned for Spring 2022. The festival is taking on a new focus and bringing on exciting partners like basic., Bibb and Tucker Sew-Op, and the Birmingham Museum of Art.

While he’s accomplished a lot since he began his fashion journey, Daniel is quick to notice he couldn’t have done it alone. When thinking of those who earliest supported him, the designer states “without those people even imagining and dreaming for me in the very beginning, I wouldn’t be nowhere near where I am today. And those people keep me going even to this moment.” Moments nowadays include international superstars like Prince Royce wearing Splashed by DKG and showing it off on their social media accounts. Daniel is humble about his growth, but also notices how it compares to Birmingham’s recent rising. “This has definitely evolved into something that was way bigger than I ever imagined and what I thought it could be. That’s the same way that I feel about the city.” While he continues to expand his fashion presence, Daniel is forever grateful for the Magic City’s ability to throw support behind a cause they believe in–and we’re just as thankful for him.